YWCAs of Connecticut Statement On Roe v Wade Being Overturned 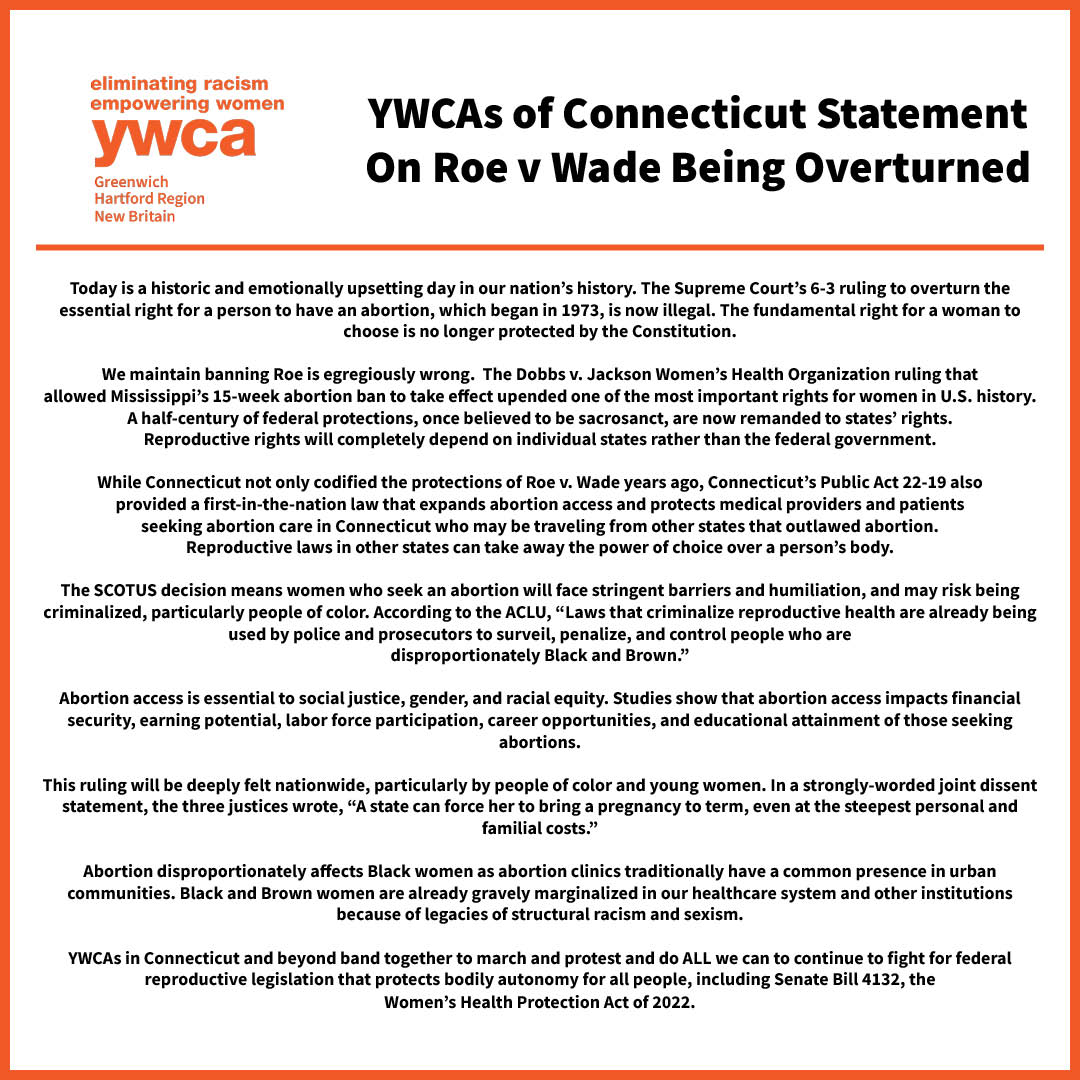 YWCAs of Connecticut Statement On Roe v Wade Being Overturned

Today is a historic and emotionally upsetting day in our nation’s history. The Supreme Court’s 6-3 ruling to overturn the essential right for a person to have an abortion, which began in 1973, is now illegal. The fundamental right for a woman to choose is no longer protected by the Constitution.

We maintain banning Roe is egregiously wrong. The Dobbs v. Jackson Women’s Health Organization ruling that allowed Mississippi’s 15-week abortion ban to take effect upended one of the most important rights for women in U.S. history. A half-century of federal protections, once believed to be sacrosanct, are now remanded to states’ rights.
Reproductive rights will completely depend on individual states rather than the federal government.

While Connecticut not only codified the protections of Roe v. Wade years ago, Connecticut’s Public Act 22-19 also provided a first-in-the-nation law that expands abortion access and protects medical providers and patients seeking abortion care in Connecticut who may be traveling from other states that outlawed abortion. Reproductive laws in other states can take away the power of choice over a person’s body.

The SCOTUS decision means women who seek an abortion will face stringent barriers and humiliation, and may risk being criminalized, particularly people of color. According to the ACLU, “Laws that criminalize reproductive health are already being used by police and prosecutors to surveil, penalize, and control people who are disproportionately Black and Brown.”

This ruling will be deeply felt nationwide, particularly by people of color and young women. In a strongly-worded joint dissent statement, the three justices wrote, “A state can force her to bring a pregnancy to term, even at the steepest personal and familial costs.”

Abortion disproportionately affects Black women as abortion clinics traditionally have a common presence in urban communities. Black and Brown women are already gravely marginalized in our healthcare system and other institutions because of legacies of structural racism and sexism.

YWCAs in Connecticut and beyond band together to march and protest and do ALL we can to continue to fight for federal reproductive legislation that protects bodily autonomy for all people, including Senate Bill 4132, the Women’s Health Protection Act of 2022.